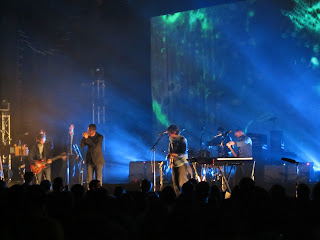 There is no greater disconnect between a band's recordings and their live performance than that of the National. An overstatement? I think not. The National recordings would not be effective in a pre-game locker room to pump up the boys, nor would they something you turn on when driving down a lonesome highway at 2:00 AM to fend off sleep. Naturally, I expected a somewhat sedate concert, more along the lines of a symphony than a BSP cacophony.

I (and I think the rest of the crowd) was taken aback by the fierceness of the concert. The guitars squalled, the bass hammered, the lead singer screamed, it was a legit rock concert. I'm pretty sure the crowd was not expecting this because there were only about four guys on the front row who were acting like it was a rock concert. You could have imported a bunch of MXPX fans and they would have had a great time. After the concert, I went home and turned on Squalor Victoria thinking, "How did I miss that awesome double guitar attack at the end of the song when I was listening to it?" Turns out that the double guitar attack does not exist on the recording. If there ever was a justification for an official live album, this is it.
This enters the National into the "My perception of the band is permanently altered because of how great they are live" pantheon with My Morning Jacket and Wilco. I think the National is now sitting at the top of that list.
Individual notes from the concert:
Matt's voice was perfect. On-key, never missed a note, and they had the mix perfect so that his voice really stood out. Incredible. Even when he was drunk off his can.
The National were way less serious than I expected. Joking around, acting like they actually like each other, Matt even made fun of the lyrics of Sorrow after they finished performing saying: "If you think about it, those lyrics are pretty funny" then sang a couple of lines and laughed. They even shook hands with the four guys at the front who were jumping and singing the whole time, meaning that they actually noticed the audience. I have been front row for a few bands and no one ever recognizes "Hey, you guys must be huge fans, let's shake hands."
The finale was an acoustic singalong of Vandelyle Crybaby Geeks which might be the coolest singalong I've been a part of. (Better than U2, Pride, 2001, SLC? Hard to say. This was more than just the whole audience singing "Oh oh oh oh oh oh" This was the whole audience singing every lyric with Matt stumbling around drunk.) (Christina recorded the video.)

I really need a bootleg of this show. If anyone happens to stumble across one, please let me know.
Posted by Jimboborazzala at 9:01 PM