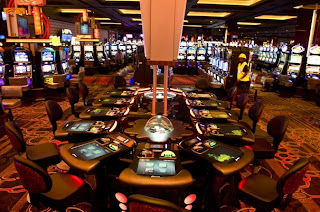 Suede once said "Gimme gimme the power and I'll make them believe."

The voters have given the power to the Maryland General Assembly and they have made me a believer in all those stories I heard in high school about local politics. Party mattereth not. If you were to describe a legislative body that agreed to prostitute itself and give one-third of that money to the pimp so that it could pay for the education of the children of the very people with whom it was engaged in such prostitorial acts and that willing agreed to provide a slice of that revenue to the pimp because another pimp appeared and said "I want you to work for me, prostitute" and you wanted to satisfy the desires of both pimps, I would say, "Those gosh darn Republicans are at it again, exploiting the poor to satisfy the wealthy soulless vice mongers that are casino owners."

But this is Maryland where there are no Republicans save those who are unbelievably similar to that terrible 30 Rock impersonation of an Eastern Republican that was foisted upon us by Roger Sterling. (In 2010, the Republican candidate for Congress in my district wanted each locality to print its own currency.) So, the Democrats, the champions of the people who will tax us and bankrupt us but dang it it's for the poor and the firemen and the policemen and so that's ok (and it might be ok), who have been over the last four years, approving placing slot machines at environs like racetracks...and then casinos at family friendly places like Arundel Mills...and now Las Vegas-esque casinos in the National Harbor and maybe downtown Baltimore, turning the BWI parkway into the most casino-ridden stretch of land outside of Las Vegas. Did I mention that these casinos don't have live dealers? People play poker on ipad-equivalents. Craps are digital dice. (I really don't understand the appeal of a dealer-less casino. Don't you trust playing against the dealer in poker instead of a computer that seems more easily programmed to cheat? Isn't part of the fun of a craps table having a hot woman blow on your hand and saying in a sexy voice "I think snake eyes, mon cher" and then finding someone else when you crap out?)

As with all things, this is for the children. Stripping the money from the middle class and the poor (who are those predominantly affected according to studies, and if you were a high roller, are you going to a place where there are no live dealers?), destroying their families through economic ruin and addiction and then trying to fix the problem through education. Nice.

Even more awesome? Slot machines in American Legions! Because the American Legions are vastly underfunded, we should get gambling money from the veterans so that we can then provide them with more services such as coping with gambling addiction.

And finally, the kicker. There has been a big fight in the General Assembly about passing the latest gambling law that will put the Las Vegas casino in the National Harbor (and possibly elsewhere). Who is against this? Oh, the current casino owners who think that they will lose revenue because of the competition, because their current casinos are just acres and acres of slot machines and ipad games. So, naturally, the General Assembly decided to give the current casino owners tens of millions of dollars to make up for the lost revenue. We are subsidizing the crappy casinos when the state has been furloughing workers. Governor O'Malley has been providing excellent leadership in this area by declaring he is "sick of the issue" meaning that he is sick that it hasn't passed faster. (And on a personal note, I am incredibly bothered to see that the majority whip is a guy whose kids were on my kid's soccer team.)

Voters can vote against this in November. Last chance to save the state from becoming Sam's Town East. And when the voters approve of the casinos, I will hear a knock at my door. I will open it and find Brandon Flowers on the porch. He will toss me a poker chip and say, "Ain't nobody tell you? The house will always win."

Doug, nice to hear from you again. It must be campaign season. You make good points. The idea that lotteries and casino gambling will save the state's education system has been shown time and again to be false. It's a bad idea that just won't go away.